What is Chinese Astrology

You are here: Home / What is Chinese Astrology

We have always sought the answers to the mysteries of existence by looking to the skies in wonder, contemplating our lives and the nature of reality. In the ancient China, the early philosophies were built around concepts of nature and the Universe. Nature was seen a self-generating phenomenon; a complex structure composed of interacting elements which create the fabric of experience. 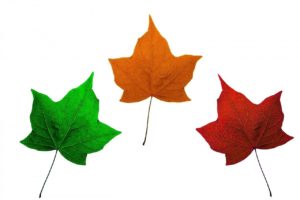 The ancient Chinese acknowledged everything as an expression of energy Qi, including life itself. 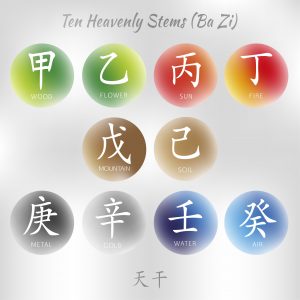 Gaining an understanding of these Stems and Branches proved to be quite difficult as people were often illiterate, so animal symbols were soon used to represent the Twelve Branches (also known as Twelve Zodiac signs of the Chinese astrology: Tiger, Rabbit, Dragon, Snake, Horse, Goat, Monkey, Rooster, Dog, Pig, Rat and Ox).

The Ten Stems were easier to comprehend, since these represent the Five Elements in their Yang and Yin polarity (Yang Wood and Yin Wood, Yang Fire and Yin Fire, Yang Earth and Yin Earth, Yang Metal and Yin metal, Yang Water and Yin Water). 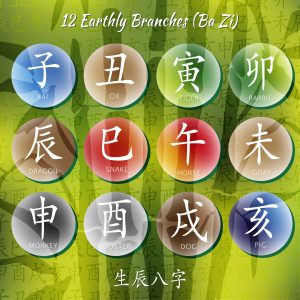 Although some schools of Chinese Astrology use lunar calendar to calculate the beginning of the year, in Ba Zi practice we mostly use the solar calendar, which means the New Year always appears at the beginning of February (usually on the third or fourth day of the month, depending on solar longitude). Therefore, people born between 1st January and 3rd or 4th February, were born in the previous (solar) year. Each Pillar (Year, Month, Day and Hour) contains one Branch and one Stem, thus the names Ba Zi (Eight Characters), and the Four Pillars of Destiny.

When you calculate your Chinese astrological chart (www.bit.ly/BaZiCalculate) you will see there are four pillars relating to your date of birth

This is the year you were born (as measured by the Chinese Solar Calendar); it represents your grandparents, and ancestors – together with the influence of the wider environment.

This is the solar month of your birth; represents your parents and siblings – but can also refer to your career.

This is the day you were born; it represents your Self, but also your health, love life and spouse.

This is the hour you were born; it represents your hopes and dreams, but also – children.

Each pillar consists of an upper and lower part; the upper part contains one Heavenly Stem, while the lower houses your Chinese Zodiac Sign – one of the Twelve Branches.

The importance of your Self Your Ba Zi chart reveals certain inner dynamics, quite unique to – you.

While the external pillars (Year and Month Pillar) describe your immediate and wider surroundings, the inner pillars (Day and Hour Pillar) are more related to who you are – especially the Day Pillar.

Therefore, the Stem and the Branch of this particular Pillar, Day Pillar of the Ba Zi chart, are especially important.

The Stem of the Day Pillar of your birth is also known as your – Self, or Day Master.

In Ba Zi chart analyses, Self is also the main reference point.

In order to be able to read the Ba Zi chart and understand one’s Destiny and Luck, you have to know one’s Self, because everything (life) happens TO – Self. 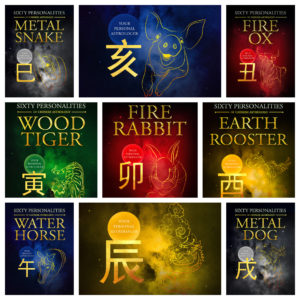 Visit our e-book store on Shopify, to explore the world of Chinese Astrology Ba Zi and Feng Shui.

Our Store (so far) contains 66 e-books and 2 hardcover books.

We are proud to present Althea’s